You are here: Home / Covid19 / Is Your Employer Supporting the Physical and Mental Health of Employees In The Pandemic? 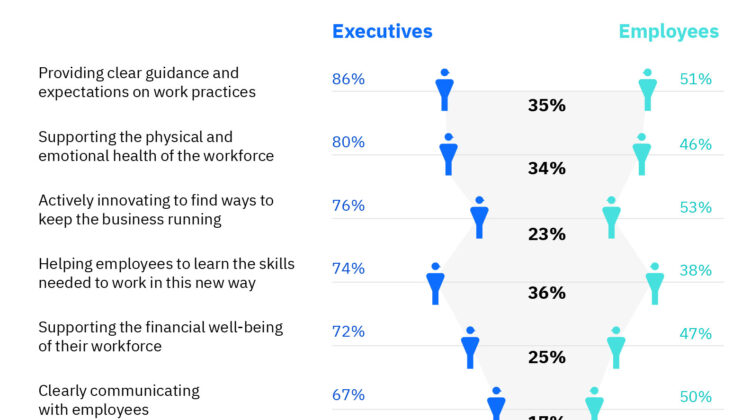 Studies suggest it depends on who you are.

When IMB polled Company Executives, they found 80% or more agreed or strongly agreed that they were being supportive. While many companies have not instituted hazard pay programs (or Superior service pay), others have. And those executives can point to these programs as evidence the company is being supportive.

The study found that when employees were posed the same question, a low 46% agreed.

A recent study from IBM found that:

“when asked if companies were supporting the physical and emotional health of employees, 80 percent of executives agreed or strongly agreed. Yet when the same question was posed to employees, the figure was a glaringly low 46 percent.”

Over ½ of most company’s employees did not feel their company was doing enough to support their employees physical and mental health. This is in stark contrast to executives where 20% or less felt that way. A closer look at the Harvard Business Review article shares insights into what employees are feeling.

According to a recent study sponsored by the National Bureau of Economic Research that analyzed the data on more than 3 million people, the amount of time employees spend in meetings has increased by 13%. In addition, the average workday is now 48 minutes longer. What’s especially troubling here is that video calls are actually harder on us physically and mentally.

What do you find in your company?