You are here: Home / Featured Home / I Should Have Gotten a Ticket for Reckless Driving – Road Rage Part IV 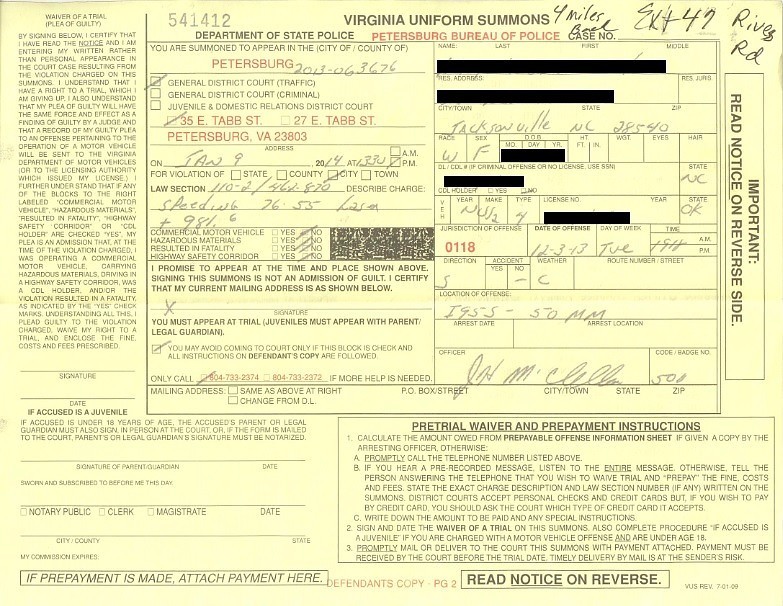 That’s got to be reckless driving, I thought to myself. What I said back to the officer was, “No.” He asked if I had seen the posted signs for the work zone? I said I wasn’t paying attention. He said “you didn’t see all of those signs?  I smiled and said, “I was singing to the radio.”

Then he asked how my driving record was?

I told him that I hadn’t had a problem since I was a teenager (which works out to be almost 50 years ago). He said, “let’s hope we can keep it that way,” and he went back to his cruiser.

So, am I sitting in my truck, on the side of the road, with the window rolled down.

The lights from the police cruiser fill the rear-view mirror and both sides mirrors with such a piercing light I can only make out a rough outline of the police car. In fact, I did not even see him walking towards me until he was at the window.

And I didn’t see him parked, with his lights off, hidden between the work zone barricades.

The fact that it was after 12:00 AM is not an excuse. The work zone has been in place for weeks. During the day, I pass crews that are rearranging the intersection. There have been flagmen, and occasional stoppages as trucks cross the highway. The right lane shifts to the left as you climb the hill towards the intersection.

With the backroads historically empty at that time of night, I often set the cruise control to 62MPH.

The larger of the back roads have 55 mph speed limits. This makes 62 not seem too out of place and helps me feel like I am making progress in my 1 ½ hour commute. On the smaller back roads, speed limits are typically 45 mph. I find myself, alone on the road, late at night, significantly exceeding that. Of course, the ability to go that speed is contingent on road conditions, how awake I am, and whether I am passing through a known deer area.

In the space of four months, I have hit three deer.

One caused over $3,600 in damage to the front of my truck. The status of the deer is unknown, but I would have to assume the worst. I spent significant time searching for it that night, and the next two days as I commuted to work over the same road. No signs of the carcass. Not even a circling of buzzards.

Describing my encounters with the deer to my wife, she said, “why don’t you just slow down?”

It’s funny to me, how it often takes someone else to point out the obvious. On the drive to work the next day, I kept saying to myself, “why didn’t I think of that?” Well I know why. My depression convinced me that if I slowed down, it would take me even longer, maybe 2+ hours to commute to work. I just couldn’t accept that amount of time for my commute.

All or nothing thinking had taken over my view of my drive to work.

READ: I almost “should” all over myself this morning

As I examined that idea, I discovered that there were only two or three places where there was a high percentage of deer sightings and crossings. I did not need to drive exceedingly slow the entire trip. I just need to drive slowly where I know deer cross the road.

And all I had to do was examine my all or nothing thinking and ask better questions. Even slowing down significantly for these dangerous areas, I can barely tell the difference in the length of my commute. But in my mind, making the switch to a slower speed meant overcoming depressions take on the situation.

Awakened from my daydream, the officer appears back at my open window.

He hands me my driver’s license and says, “I’m just going to give you a warning. But please watch the signs more carefully.” I said, “yes officer, and thank you.” He smiled and walked back to his vehicle as I put my driver’s license back in my wallet. Putting my seat belt back on, I started the truck, signaling to pull back onto the road and headed for home.

Almost 24 hours later, I am still in awe of how lucky I was last night.

I am catching myself feeling guilty for not paying the price for exceeding the speed limit. Worse, I am feeling hypocritical as I often tell employees “it’s what you do when no one is watching that defines who you are.”

And I am a speeder.

Driving in the New York, New Jersey area for over 20 years, I know how the games are played. Not getting caught is the game. It is played out on every highway. But, in big cities and overcrowded bedroom communities of “the City”, having people piled on top of each other makes the game special.

“Even though I am in the far-left lane, I WILL cross in front of you at extreme speed, then slam on the brakes to make the turn that I should never have tried to make.” Most times it works out for the driver, but sometimes ambulances’ and trips to the emergency room become the consolation prize.

Back to last night, I knew better.

The right lane moves over quickly. You are directed over by the traffic cones and there are two clunky elbow turns required to navigate through the area. Lately, I had been slowing down a little through the turns, just because it is more comfortable at a slower speed. Last night, I just wanted to be home. And I was singing loudly, getting into an Allman Brothers song on the CD player.

So, I did not tap the cruise control to slow the truck down.

Now here I go, flying through the elbows and as I emerged from the other side, I saw the lights of the police car. My mind raced back, and I remembered I saw a form among the barriers. It must have been the police car. Now I have turned off the CD and am slowing down, looking for a safe place to pull off the road. I believe he is a real police officer, but I am also alone on a back-country road, after midnight. Finding a streetlight near a farm home gave me some comfort.

“Pay more attention” was his warning.

I can do that. Being able to recognize things I should change is what has helped me in learning how to live with MDD, major depressive disorder. And doing the right thing, even when no one is watching, has been my trademark. Or at least that is what I tell myself and project to others. It turns out I am human, too, and am not always perfect.

But, for better or worse, sometimes, my natural open-honest, friendly face keeps me out of trouble.

READ MORE:
It’s not quite Road Rage – But it’s a trigger

Why Can’t He Count? – My Road Rage Continues

It Wasn’t Me This Time – Road Rage Part III

My Concealed Depression is written under the alias “Depression is not my boss.” I have certifications in SMART Recovery and am a Global Career Development Facilitator.

I always appreciate your comments.