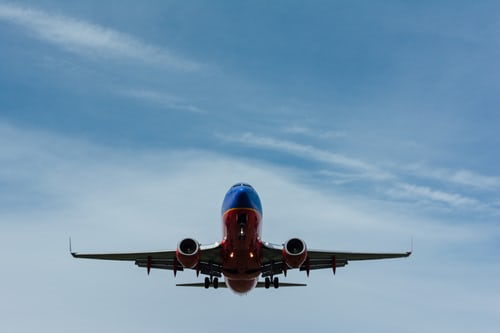 That’s what I see from row 6, seat C of the airplane. Almost immediately after takeoff, my perspective changed. At first, I was seeing Buck Mountain Road that I had just traveled to get to the airport.

Then the city passed under us, getting visibly smaller as we climbed to our cruising altitude. Now I am wondering why I am writing in the past tense. I guess it is now the past for we are already 20 minutes into our flight to Chicago.

The other big picture is that life is not always direct.

It takes momentary twists, turns and unforeseen detours. Such was the case today. We should already be in Chicago. I should be picking up the rental car and heading towards the SMART conference. Instead, I am writing this, musing about what happened to the mechanics on our original plane. We had to wait for a replacement flight and then boarded. It has put us over an hour behind.

I am reminded that I expect the best but plan for the worst. I have had two decks of Bicycle playing cards, a blue deck, and a red deck, in my travel backpack for years. When there are delays, we can use the two decks and play Kings, or one deck, as we did today, and play Gin Rummy. The cards take up very little space and can be brought out on a moment’s notice.

The benefit of this is I got to spend “face-time” with my traveling companion.

Most of the other travelers at the gate were on their cell phones, heads bent in reverence to the technology we all live with. I was so excited to not be doing that, to be engaging with my travel companion, making conversation and enjoying the company.

I am happy to be learning how to live in the present.

It doesn’t always work that way, but I am certainly enjoying the benefits of it when I can do it. I had fooled others for years, making them think I was being present in the moment with them as my focus, but I realize I was very often fooling even myself. Living with concealed depression, my goal was to look and sound normal (however I thought that needed to be defined at that moment). No chinks in the armor, no hint that I was not perfect.

Listening to others, having a conversation, was often about control.

It was not about hearing what the other person was saying, not trying to ask questions to understand, but rather it was about timing. When the other person would pause to catch their breath before going on, I could jump in and make sure the conversation steered towards where I thought it should go. I would fool myself thinking this was really in the other persons interest.

Depression would remind me that it had the real answers, that by saying as little as possible, never explaining, I would be OK and everyone would get what they needed, especially me. What a crock of you know what.

The more secretive I became under depressions push, the worse things got.

But I couldn’t see that because by then I was in unhelpful thinking, all or nothing territory, and/or fortune-telling where I had the whole story worked out and didn’t need to actually talk to anyone about my plans because it was way too obvious that depression and I had it figured out. It was the world’s greatest plan, but only I could make it happen.

Then when the stuff hit the fan, there were cricket sounds, because depression was nowhere to found.

It had slinked away under cover of darkness, leaving me to pay the bill. And I let that happen time after time after time, for 43 years. So, the point of my writing is to assure myself that I am changing, that I am on the right track for a better future. I can see my progress from up high, and more importantly on the ground, in the present moment.

Seeing the big picture can be healthy and valuable but hiding in the sky is not.

Recognizing the chance to share some face time was a wonderful gift. And that isn’t because I won all the hands we played. I got a chance to deepen a connection and learn more. The world may be easier at 20,000 feet, but life happens on the ground, moment by moment.

I plan to be there for as much of it as I can.