You are here: Home / Featured Home / 28 weeks into recovery, now I have residual depression? 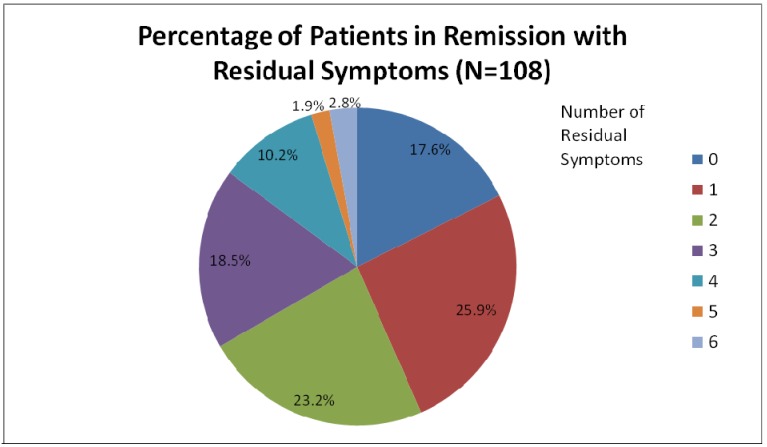 I knew living with depression was not going to be a cakewalk.

There are challenges and setbacks, successes and snags in my recovery. Now I find out that there are response and remission. I know I was thinking of my recovery as remission. How naive is that?

Speaking with my Peer Advocate today, I heard the term residual depression for the first time.

Until today, I did not know there was such a thing. But then again, there is a lot I do not know about depression and living with it. Below is the introduction to the article I read concerning residual depression.

It is well established that approximately 55% of patients with Major Depressive Disorder (MDD) will respond to treatment with an initial antidepressant medication [1]. “Response,” when considered in its colloquial meaning, sounds like a highly desirable treatment outcome for a patient with depression.

In the psychiatric literature, however, this word has a precise meaning; patients and clinicians alike should have an understanding of this meaning, so as to avoid inflated expectations and disappointment for patients and overconfidence and lack of close follow up on the part of clinicians.

When the specific meaning of “response” is considered, it becomes clear that many patients may still be suffering greatly from symptoms of MDD, even when they can be considered treatment responders. As an example, a patient whose HAM-D score reduces from 32 to 16 with treatment will still likely be experiencing considerable impairment and distress. In some patients, statistically significant reductions in scores can even be demonstrated in the absence of clinically meaningful improvements [4].

Remission, on the other hand, is conceptualized as a return to a state of normal functioning and minimal symptomatology [5]. Remission has been operationalized in clinical trials as a threshold, or cut-off score, using standardized scales.

Among the most frequent residual symptoms of MDD are ongoing low mood, guilt, insomnia, anxiety, impaired work, loss of interest, irritability, fatigue, lowered libido, and a range of somatic or physical symptoms.

So, unscientifically and without the benefit of a trained clinician to administer the test, I searched for and found many versions. All are similar, with one giving a more robust description of each question. The links to an online version are here:

Depending on your interpretation of the different phases of sleep, I scored either a 13 or aa 14. This puts me on the cusp of moderate to severe depression. This was not what I wanted to hear after being out of the hospital for over 26 weeks.

I had hoped for a total cure, a miracle that would forever banish depression to the depths of hell, never to be seen by me again.

That dream sure didn’t last.

Now I am faced with getting in touch with my Psychiatrist, who thought my cloudiness in the morning and lack of desire to get out of bed was because I don’t need as much sleep now that I am older. While this may be true, arising is still just the first challenge.

No longer getting excited about things, loss of interest in hobbies, decreased social activities are showing up in my life. Or they are not showing up because I don’t have the energy or desire to think about or get involved in anything that doesn’t keep me alive. This really makes me angry.

How could I not see that in many ways I am back up against the wall.

There needs to be a part two. I’ve got to process this.