You are here: Home / Coping Statements for Anxiety / My Psychiatrist Asked Me, “When Is Enough, Enough”? 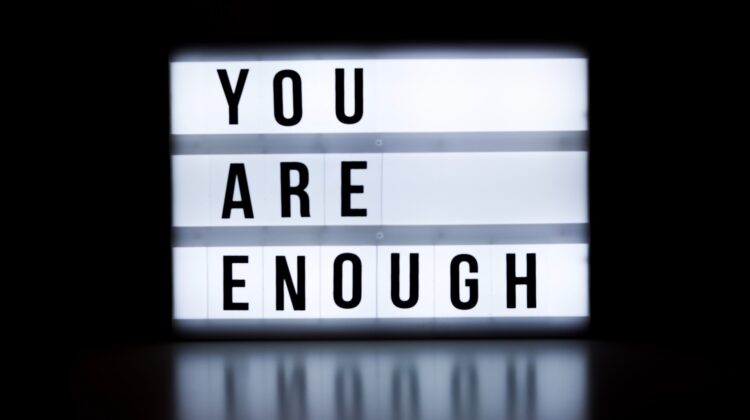 Last night I had a virtual therapy appointment.

I remember my therapist had asked a question and I was responding. It was my side of the story I was relating. Not just the facts or my feelings about it, but I was defending my actions. My decision and why I made it was a source of pride I suppose.

My therapist stopped me and said, “I hear rationalization.”

He had caught me, and I quickly admitted it. It wasn’t about the question, I just wanted to be right. I am not sure when I decided that I needed to be right, even at the expense of the truth. Many times, in the past I have defended my actions, and my decisions. Often this defense was way beyond what was needed.

We spent most of the virtual session discussing unhelpful thinking styles.

I have collected a lot of research into the topic and have been given, have discovered, or created handouts that clearly show each of the ten major unhelpful thinking styles. In the past, I have spent a great deal of time entertaining each of them.

For years, I loved to Time Travel.

I would spend much of my time wallowing in the past, second-guessing decisions I had made. Even though I know I have made these decisions, I would imagine what a different decision would have meant. Lately, I even have been trying to measure the percent that was me and the percent that was depression.

Another of my go-to unhelpful thinking styles is Fortune Telling.

I have been famous for looking at a situation that needed me to decide. Often, this was a decision that involved another person. I would imagine what they must be thinking. Then I would see the outcome depression had laid out for me.

Then I would relate, in my head, why I was reaching this decision. Once I had decided how it would end, I would act without ever needing to talk to the person involved. I had foretold the future and taken the appropriate action based on the ending I had predicted.

If then is another one of my favorites.

But if, then has a more sinister side for me.

When I was in Five East, now some 29 months ago, I met with a group of psychiatrist interns and their overseeing Psychiatrist. It was obvious who had the experience. I was asked a few generic questions by two interns. Based on the question, I was describing the different certifications I had sought out for my resume/career coaching business.

I remember clearly, him standing against the wall at the far end of the cramped conference room.

I was seated along the side facing the wall, at the end of the table farthest from him. There were interns seated on either side of me, and they filled the remaining nine chairs around the conference room table.

Each one was wearing a white lab coat, with hospital badges layered on the cord around their necks. Their instructor was not wearing a lab coat. He had on a brown suit coat with contrasting trousers. When he spoke, everyone fell silent and focused their attention on him.

In response to my listing all my certifications he asks, “when is enough, enough?”

Well, that woke me up. Up until he said that I felt that if I just got one more certification surrounding my business, then I would feel like I was a true professional. Never mind that I had a list of several hundred clients over ten years at that point. Forget that most of them landed new jobs, started new careers because of my work with them.

Heck, I was even discounting all of the positive thanks you’s I had received across the years.

And then I would repeat, “IF ONLY I had another certification, THEN I WOULD be good enough, knowledgeable enough.”

That morning, the head Psychiatrist on Five East called me out.

It wasn’t in a mean way; he was asking what a logical question to ask. This single question has been with me ever since. Periodically I have been examining it. Sometimes I have fought against it, using an unhelpful thinking style to rationalize my position.

But every time, in the end, the Psychiatrist’s question, “when is enough, enough” illuminates my thoughts and challenges my assumptions.

I am grateful for that teaching moment. This was one of several takeaways from my hospitalization. Another was a chaplain who came one afternoon and handed out cards and envelopes. She said if we would write a letter to ourselves, she would mail it in 30 days. When mine appeared in the mailbox, I held on to it for days before having the courage to read it.

The final major takeaway I received was a list of the ten main unhelpful thinking styles.

It turns out that the nurses had copied someone else’s handout, who had copied it from another source. Regardless, this handout has reinforced how depression operates and how I have bought into its ideas.

Armed with this knowledge, I have been focused on listening for unhelpful thinking and calling it out when I hear it. After 29 months, often I can hear the unhelpful thinking as I say it, or sometimes as I think it. Then I can make a different choice.

After all, I cannot control events, but I can control my attitude towards them.

So, I continue to work on my attitude towards “when is enough, enough?” I am making considerable progress and value all the tools, support, and medication management that have supported my recovery. My continued growth is due to the support of many people. For the past 50 years, these people or ones similar were always there. It’s just that I hadn’t realized it until 29 months ago.

Believing that I am enough, as I am, is still a work in progress.

But when I struggle with this, I think back to my time on Five East. I remember that morning with all the interns crowded around the conference room table. And mostly, I remember their teacher asking that prophetic question. “When is enough, enough?”

Working on the answer, I remember that I have depression, depression does not have me.